Tablets have been present for a few years. Even though they were available, they weren’t as popular because they were hard to use, bulky and had limited battery life. They were also very expensive 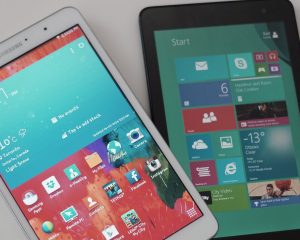 and only a few could afford them. This changed after the release of the iPad. The iPad was developed by Apple Inc after the success of their iPhones and iPods. They were successful devices that people primarily used for entertainment and light productivity.

The popularity of the iPad made other smartphone manufacturers to compete with Apple. This led to the release of Android powered tablets that were manufactured by Samsung, HTC, Sony and many others. Today, even though tablets are not released regularly like phones, they are very popular and make up a large part of some manufacturers sales. Here’s a list of the best tablets available right now.

The Apple iPad is the best-selling tablet range of all time. Since the original iPad, Apple has upgraded the tablet considerably. Initially the tablet was used for perfect smartphone comparison but now it compared with laptops. Each generation of the iPad was more powerful from the last and the current iPads, the iPad Pro 10.5 and 12.9 are sold alongside the less powerful iPad 9.7. The iPad Pro models are more of laptop replacements while the iPad 9.7 is an entertainment device. The iPad Pro is considered as one of the best tablets available right now. The apps and features available are rivaled by a few. It is a true power horse that is even more powerful than some Apple MacBook’s as well.

The Microsoft Surface Pro tablets are 2 in 1 detachable device that run 64-bit Windows. The device was available for purchase since 2013 and Microsoft has revised and improved the device since the original. This device is detachable so it can be used as a regular tablet and can be used as a laptop when attached to the keyboard. The other advantage is the fact that the device runs on Windows, therefore it can be used like any regular laptop. Unlike the iPad, the Surface Pro does not have a mobile broadband plans slot and has to rely on Wi-Fi connections.

The Google Pixel C is an Android tablet released by Google. This tablet runs on the Android eco system therefore has access to Android apps. It can be attached to a keyboard but like the iPad, it doesn’t have mouse support. It is a great entertainment device that is priced well. The Google Pixel C was created for the more budget concerned who cannot afford an iPad or Surface Pro tablet.

0shares
This site uses cookies: Find out more.
Back to Top